Less More
3 years 10 months ago #716 by movat
API issue for Perth, Western Australia was created by movat
I'm having some issues with tracks & flights from the API. It was working fine yesterday.

When I go to lookup the track it returns 404 and blank data, even though it is in flight at the moment.
opensky-network.org/api/tracks/all?icao24=7c6f67&time=0

I tried some other aircraft near the area and same issue. Although some also seem to have the times incorrect in the flights part of the API.

I tried some aircraft that are not near Perth, and the issue is not replicated, so I'm not sure what seems to be going on.

Side question - the times in the API calls and returned by the API are UTC correct?

Less More
3 years 10 months ago #718 by movat
Replied by movat on topic API issue for Perth, Western Australia
More on this, looks like the API is returning data 3 or 4 days old (as of today) for "tracks/all" and "flights/aircraft" which is causing my issue.

Less More
3 years 10 months ago #722 by jluebbe
Replied by jluebbe on topic API issue for Perth, Western Australia
About two weeks ago many tracks appeared scrambled. Later, they looked better but seemed to be outdated. As a workaround for my use case(verification of flight route database entries), I check that icao24 as well as the callsign are identical to the data of the flight of my interest. I would also check that no timestamp from the track is older than a reasonable flight duration.

Less More
3 years 10 months ago #725 by rhizome23
Replied by rhizome23 on topic API issue for Perth, Western Australia
I have an issue like this when i'm trying to catch the departures data for an Airport.
My code here : github.com/Rhizome23/aircraft-project/bl...ster/LastPlane.ipynb
When i'm trying to catch data from now t to t-1, t-3, or t-5 hours i have an empty result. But it's ok if i'm doing with now-1 day !
I try it in loggin mode or without authentification and the result is the same. So i can't have real time data for departures in an Airport, is it the same issue ? or something else ?
Thanks

Less More
3 years 10 months ago #726 by jluebbe
Replied by jluebbe on topic API issue for Perth, Western Australia
Hi rhizome23,
There are different types of flight route/track data:
1. The tracks related to an aircraft icao24 id which are normally available as soon as the flight is airborne and within the coverage of receivers contributing to opensky. This track appears if you click on an aircraft in the explorer.
2. Departures, Arrivals, Flights available in the API. These flights are estimated from recorded aircraft positions and known airport positions. Due to limited coverage at low altitude or missing coverage at all, the origin and/or destination airport cannot always be determined properly. Parameters related to the precision are given by the API (number of candidates, ...). Flight data is processed in certain time intervals.
3. Flight route information shown if you click on an aircraft. Data from the above mentioned data sources is checked and corrected using open data APIs of airlines and airports as well as user input (not yet fully automated). This database operates on the assumption, that a callsign represents always the same flight route. If the aircraft positions exceeds several criteria related to deviation from the assumed flight route, this route will be rechecked or finally removed from the database.

Less More
3 years 5 months ago #897 by phuongtran
Replied by phuongtran on topic API issue for Perth, Western Australia
Well, it seems it is not working at all for this API, even on OpenSky Explorer page: 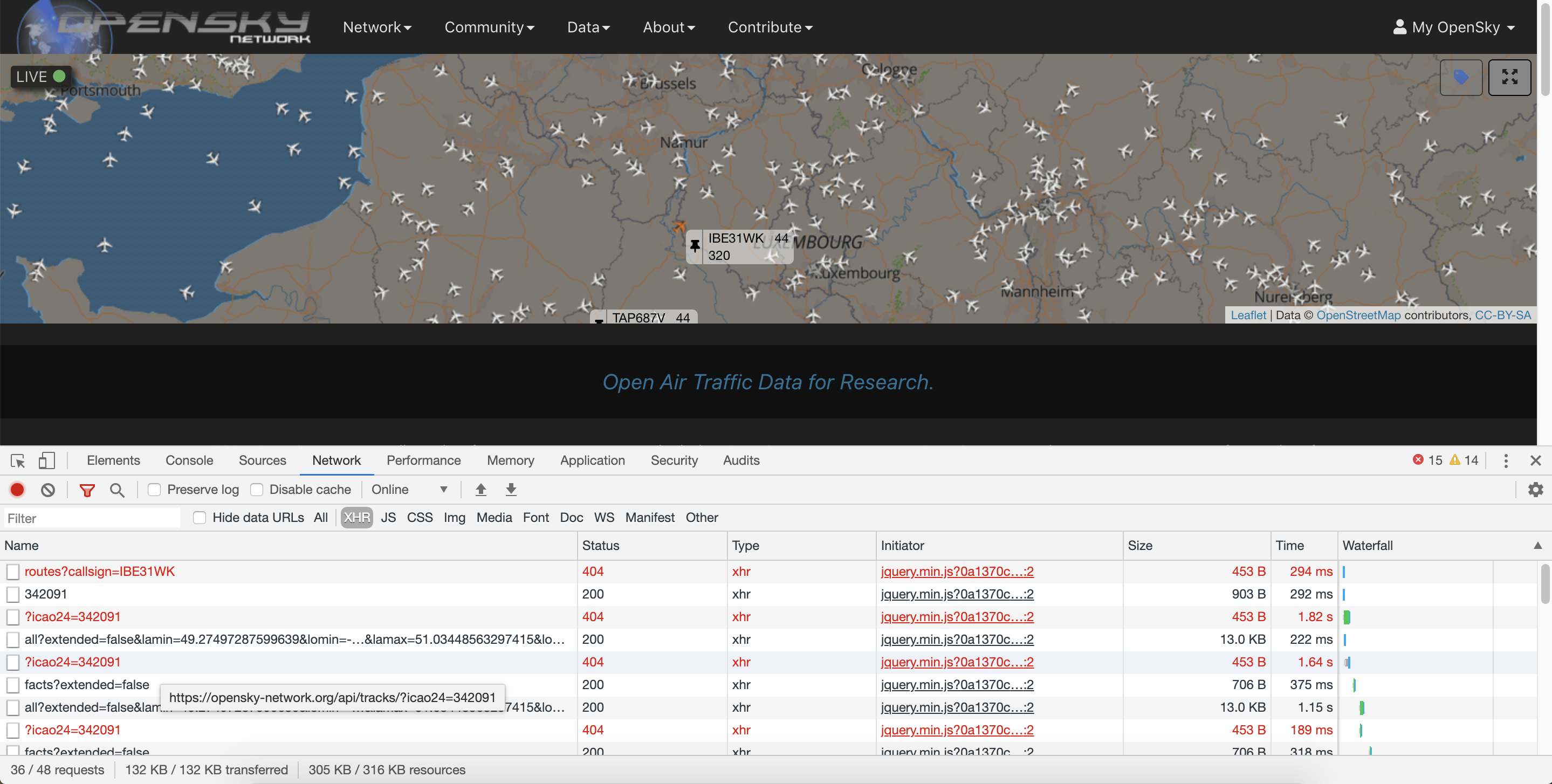