Aircrafts set back to previous position and consequently shown/send wrong

Less More
1 year 7 months ago #1532 by Nesbit
Aircrafts set back to previous position and consequently shown/send wrong was created by Nesbit
Hi,

I am using the live positions delivered via the OpenSkyAPI in a private project to track a few selected aircraft.
The last few weeks I noticed aircraft getting set back when they should just arrive at the final destination.
Example from today (hexcode: 0x3cc000, D-CAAA):
Aircraft is approaching Hamburg (EDDH) and near the moment it should touch down it is set back to a position south of Hamburg, a few minutes back into the flight.
This can be seen in the data delivered by the API and in the OpenSkyExplorer MapView. Other trackers show the aircraft on ground, on OpenSky it never reached that state.
I also observed this mostly happening in the afternoon hours (CEST) and not exclusively to one airport.
Sometimes these aircraft later reach the destination airport, sometimes they just disappear.

I attached a screenshot of some of the data on final approach, where you can see the values jump around. 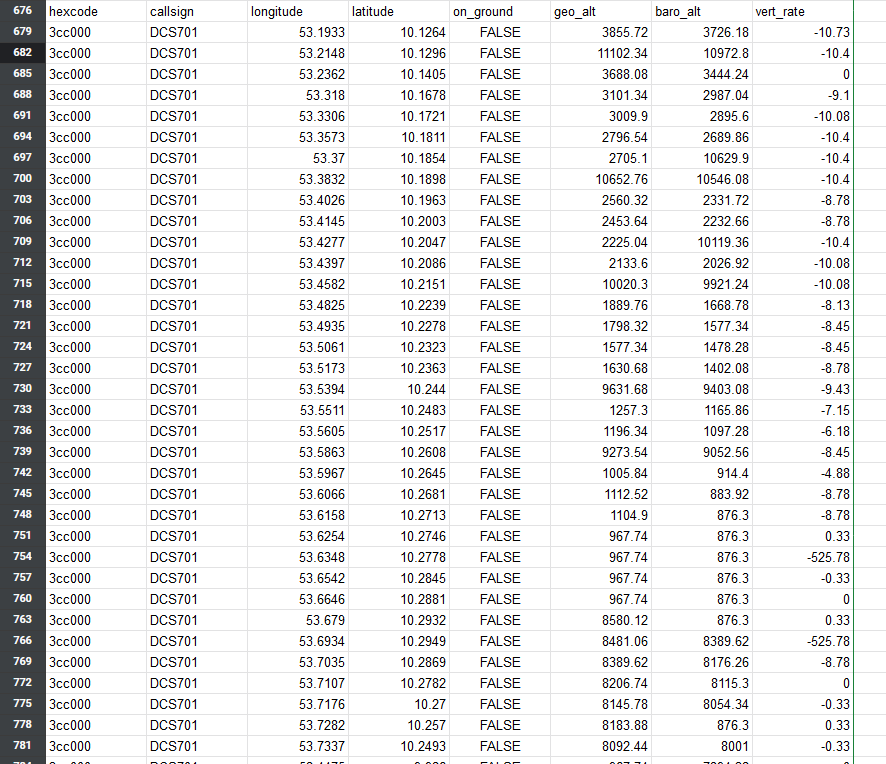 Is there anything on your side indicating this behavior?

Thanks for the help and for OpenSky in general!
Gerrit

Less More
1 year 7 months ago #1540 by strohmeier
Replied by strohmeier on topic Aircrafts set back to previous position and consequently shown/send wrong
This had likely to do with this timing bug: opensky-network.org/forum/bug-reports/62...econds-in-the-future

Have you checked again?

Less More
1 year 7 months ago #1543 by Nesbit
Replied by Nesbit on topic Aircrafts set back to previous position and consequently shown/send wrong
Thanks for the reply!

Unfortunately I could still observe this behaviour today. I too hoped it was related to the timestamp bug, but it does not seem to be. If it helps this only seems to happen when the destination is an airport, where opensky does not have coverage reaching to the ground and contact is lost before touchdown. After contact is lost, live data then shows the jumping data shown above mostly "teleporting" it back to a position a few minutes before.

Yesterday one aircraft even got teleported back to the departure airport after it should have touched down at the destination and departed again. The historical data on the website gives no indication of that, so it seems the stored data at your side is correct in the end and only live data is corrupted.